On 19th February 2017, Church of God members teamed up a group of 35 volunteers to hold a campaign to graffiti clean up on Prince Street. Prince Street, along with its adjoining streets in Blacktown, has a fresh look thanks to the hard work of volunteers. Besides, local newspaper the Blacktown Sun introduced about the event on newspaper and social media. 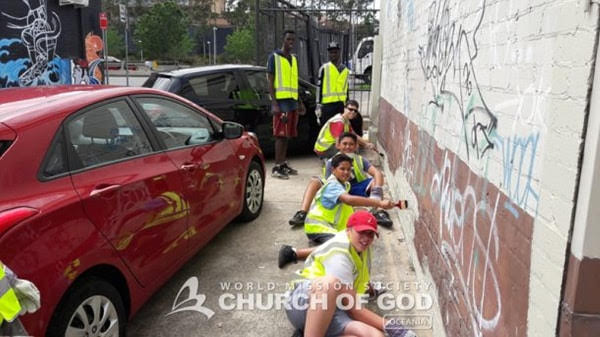 Graffiti affects many areas across New South Wales. Markedly, research suggests that the mere presence of graffiti increases littering and stealing. For this reason, citizens and local business owners feel unsafe having graffiti in their neighbourhood. Being impressed by the Church’s cleanup in December 2016, Blacktown Council once again welcomed members’ volunteering spirits by providing gloves, bags, and painting supplies.

Volunteers came along with their family and friends, spending time doing good work together. During the cleanup especially, they always have beautiful smiles, giving thanks to God for the opportunity to serve others.

Volunteers collected rubbish filling one dozen 50-litre bags, including dumped furniture and industrial waste. Graffiti on the street walls, local business buildings, and electrical poles were cleaned. The event was a great success, not only making the environment cleaner and safer but also inspiring more community work.

A local business owner, being touched by the members’ sincere efforts, provided pizza to all volunteers. “This place looks very clean and beautiful now. I really like it. Thank you so much!” he said. 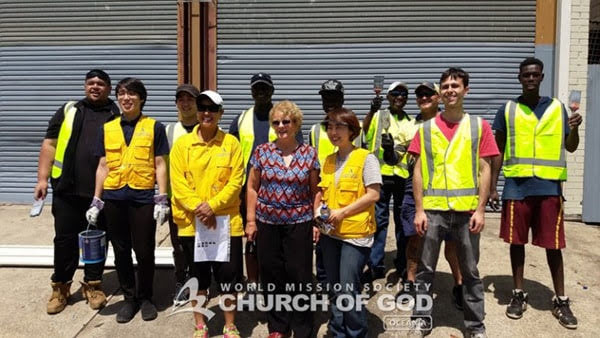 Councillor Kathie Collins gladly participated in the event and encouraged members saying, “You show today that you really care about the environment. You are one of the biggest volunteering groups I’ve ever seen on any cleanup day!”

In amazement at the work volunteers had accomplished within only 2 hours, she added “A group with large numbers like you guys can do such a great job within a short amount of time. It’s amazing! I would like to work with you in the future. Well done!”

Jeff Egan, the Project Manager of Graffiti Removal Day, also attended the event and praised the members, saying, “You guys did a fantastic job today as well as last year. Thank you very much for volunteering.” 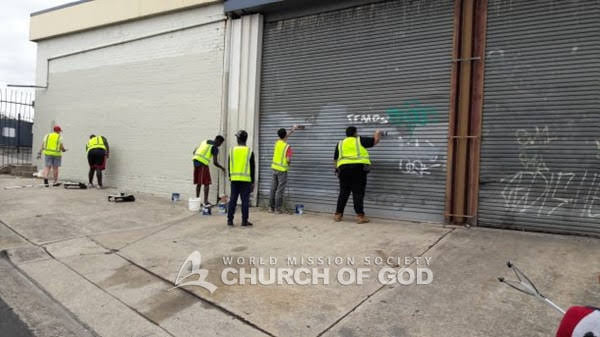 Members give thanks to God the Father and God the Mother who extended Their sacrificial love toward them. Above all, the voluntary work of the Church of God is an act of sharing the love of God with all people. They will continue to practice their faith by voluntary services, not only in their local area but also throughout Sydney in 2017, to spread the love of God the Mother.