There is a group who carry out voluntary services continually, with faith that small campaigns can change the world. They are the members of the World Mission Society Church of God. Amid individualism and selfishness, they conduct constant and devotional voluntary services in their local areas and the world.

On 28th December 2016, 120 volunteers put their efforts into cleaning the Prince streets near Blacktown Station, Sydney. It was the Church of God’s 3397th Worldwide Environmental Cleanup Campaign.

“As 2016 draws to a close, we have organised the clean-up day to facilitate a more sustainable environment for our neighbours” said Norma Williams. “When the environment is polluted and unhygienic, it could affect people’s health and quality of life. God the Father and God the Mother make selfless efforts for the happiness of mankind. We, therefore, put our efforts together for a happier and cleaner environment for our family and neighbours.”

Blacktown Council supported the event by providing gloves and bags as well as disposing of the waste collected. Blacktown Station is a busy area where many people pass by. Volunteers, including workers from all age groups, university students and families with children, gathered at 11am. They cleaned up rubbish filling 30 bags of 50L in just two hours. 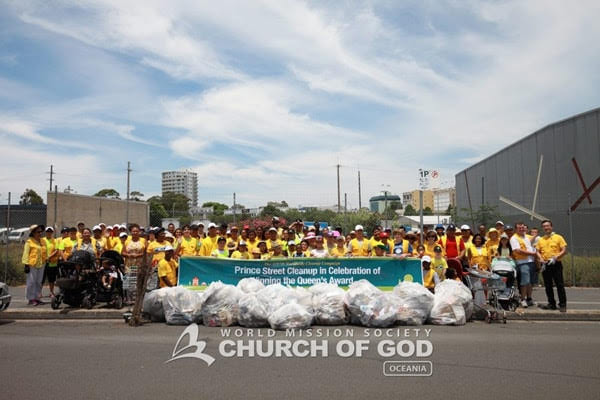 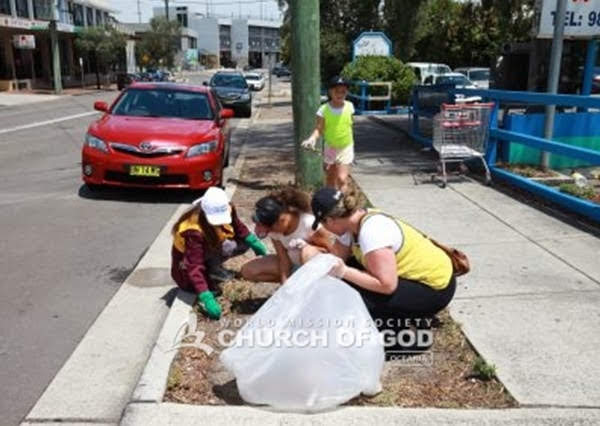 Despite the high temperature reaching 40°C on the day, the participants looked joyful and happy throughout the cleanup. Mr Mark Darko Addision, who joined the event during his holiday, said “I would like to help our local community, glorifying Elohim God who sacrifice for us.” A high school student Latisha Yeboah wore a big smile, saying, “This event encourages me to participate in more volunteer services in the future.”

Every year, the Church of God takes the initiative in contributing to the local communities in Sydney, Brisbane, Melbourne, and Perth. Volunteer work performed by the members include environmental services such as cleanups, tree planting, graffiti removal, as well as disaster relief. They also held blood drives, charitable donations to children’s hospitals, and visiting aged care facilities etc.

Besides Cleanup in Sydney, around 50 Church of God volunteers in Brisbane participated in a cleanup at Inala Ave in December 2016. Similarly, around 30 Melbourne members shared warm love with senior citizens in an aged care facility through a concert.

On 13th December, Church of God General Pastor Kim Joo-Cheol attended the United Nations Central Emergency Relief Fund conference. At the high-level CERF conference, he gave a speech. “The Church of God believes in God the Father and God the Mother, and keeps the New Covenant established by Jesus Christ. So far we have performed various activities such as environmental services, food aid, and disaster relief. These humanitarian activities come from the heart of God the Mother.” He said.

Most importantly, the Church of God will continue to work as the Good Samaritan in 2017. They hope to deliver hope and happiness to their seven billion global family members with the love of Mother.